The last post being kind of negative, I think it’s time we come back to being positive! And while many bad things happened, I am blessed to say that even more good things are happening! One of them – Coco’s birthday. Yep, this little coconut turned 1 year old this month. Even though it’s been less than a year since I got her, it seems like she has lived with me for ages. And though she isn’t seen by the public as much as my Sphynx sisters, she is loved just as much! Coco is such sweetheart, who purrs and rubs against you all the time. She is just one super happy and positive kitty! 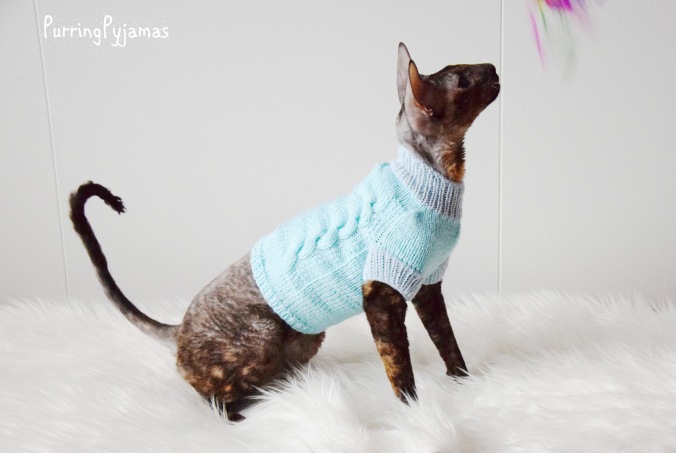 I still remember how I could hold her in my palm – she was so tiny and cute! Now she’s a real lady – super soft one, who loves to play and run around. And sleep under the blanket of course.

I am so happy that she and my two Sphynx girls get along so well – Coco is just a sister from another mister. 🙂 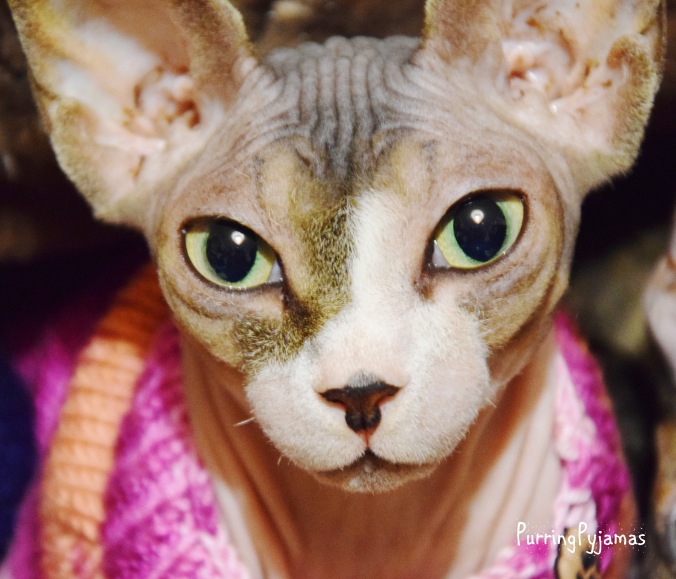 I don’t know about you, but it starts to feel like Christmas. Now I just need some snow, and Christmas songs will come to my home! But at the moment it’s cold, windy and rainy. Not very Christmasy, huh? But I refuse to accept that and that’s why I decided to do a giveaway! It’s my way of saying “Thank you” to all the wonderful people, who support me and believe in me. All the information about participating is in PurringPyjamas Facebook page, you just need to follow this link: Christmas giveaway. I wish you good luck, because that is the only thing that will decide who’s the winner! 😉

But for now, have a wonderful Friday evening and an amazing weekend!

It’s been a little over a month since I last made a post. And oh, it was one heck of a month! I’ve been sick and couldn’t work as fast and well as I’d have wanted, which made me frustrated. But finally, here I am! I am almost completely fine and can continue working on all my beautiful purring clients’ orders.

But now let’s get to the topic. So, one day, like a couple of weeks ago, I was scrolling through Etsy, just looking for gifts for my family members. At the same time I decided to check, how my sweaters appear in the search and all that jazz. So I am scrolling through all the beautiful and unique cat sweaters that people made from all over the world. And suddenly I see something not exactly what I call “unique”: a sweater that looks A LOT like mine. Obviously, I immediately decided to check it out. So, yes, the sweater pattern and the style itself is VERY similar to mine. I took a look at other few sweaters in her shop, and some of them are obvious copies of mine with a twist. Keep in mind that my shop was opened February 18th 2015 and that person opened hers in October 2015. So… who is copying who? I think the answer is obvious.

And the most frustrating is not only that she steals the ideas from my shop, but also – what I thought was extremely rude – she copied (yes, 100%!) my size chart. Seriously, that was the last drop and I decided to contact her. So, I messaged her on Etsy asking where she got the size chart from, and mentioned that all of my items (including the size chart) are copyrighted and she has no permission from me to use it. She answered very quickly. She said that she’s sorry and she will “create” her own size chart somehow (which is a good part), but she copied my size chart, because she’s got no idea about Sphynx cats’ sizing (which is not so good). I mean, really? Like, shouldn’t you do some kind of research at least before you open the shop and sell clothes for cats? She told me she likes to knit, so she decided to make cat clothes. Anyway, she “created” her own size chart by adjusting mine: she just took off few millimeters from my original sizing and that’s it.

Anyway, the hilarious part in all of this is that she even made the pricing ABSOLUTELY the same as mine with a little twist again: the bigger sized sweaters are €1 cheaper than mine. If she thinks that she can make an awesome business by stealing others’ ideas and selling them a €1 cheaper, I’ve got a feeling that she’s wrong. I personally wouldn’t go with a cheaper option, because copy will always be a copy.

There’s so many awesome shops all over the Internet creating original beautiful cat clothing, who actually know what they are doing: they have THEIR OWN size charts, THEIR OWN styles and – most importantly – THEIR OWN Sphynx cats. And for some reason all of those people have no need to steal anything from others.

Originally I wasn’t planning on writing anything about it, because I thought that me and that person resolved the copying issue and that will be the end, but she just keeps on copying. Yes, the amount of sweaters in her shop is growing, and quite a few of them are more or less copied from my designs. She even has a sweater with a cat button, made in the same style as mine.

But there’s one style I wanted to talk about in particular. So she has a sweater that has amber beads on the back (amber beads – what a surprise considering that I had the whole collection with amber). And what I want to talk about over here is the placement: it’s ON THE BACK. What cats do? They lick themselves. What cats do, when they get a grasp of something like amber bead on their back? They pull it. They try to take it off. And believe me, there’s no way to attach it on the back so it would be extra safe. Cat will pull it off. Then there’s the most important question: what cat will do when she will take the amber bead off? Well, in the best (and kind of rare) case the cat will just play with it and leave it or won’t even pay attention to it. But from my experience (considering I’ve lived with cats my whole 25 years) the cat will try to eat it. And I saw those amber beads – they’re just the perfect size to be eaten/swallowed. And here you are faced with much bigger problem than a one ugly looking sweater afterwards: the cat can choke on it or it can get stuck in a cat’s digestive system. In either case, sadly, huge medical bills and/or even death will be the case. Now, do you still think this person has any idea about cats? Does this person care about making the sweaters safe? NOT AT ALL. To me it seems like all she cares about is “Oh, I’ll just copy the designs from few cat shops that know what they’re doing, add a bit of my stuff in all the mix and earn loads of cash”. It just makes me so mad and frustrated at times not only because this person is copying others, which is incredibly rude, but also because the things she makes can be incredibly dangerous for your naked or furry family member.

Now you might ask: but Asta, you have sweaters with kitty buttons/amber/agate yourself? Yes, I do, but there’s a twist: firstly, it’s the placement. All the kitty buttons and stones are placed in that kind of position that it’s out of the cat’s reach. Secondly, kitty buttons are way too big to be swallowed and are made out of plastic, so cat will quickly give up on the idea about chewing it. When it comes to stones, they’re way too tiny to get a cat choked or get stuck somewhere in the digestive system. Anyway, I personally have never experienced my cats taking off their buttons and/or stones, and considering it’s been 3 years since I’ve been making these clothes and trying them on my cats, I believe they’re safe to use.

Anyway, that’s the end of all this ramble. I won’t tell the shop’s nor the owners name who’s stealing the ideas and making dangerous sweaters, I’ll just say that this shop is from The Netherlands and was opened in October. I wish you luck when choosing the seller, because not everyone actually cares about their original client – cats. I simply wish there were fewer people like that. Stay safe!